The Johnston Soil and Water Conservation District recognized Jerry Durham, of Durham Farms, as the 2016 Conservation Farm Family at the recent annual awards banquet. Jerry Durham is a life-long farmer, with his son, Dennis. They were one of the first farming operations who initiated the no-till best management practice to help conserve their soil. In addition to their long term no-till, the Durhams have installed grassed waterways, practice crop rotation on a regular basis, and have participated in the new soil health campaign by planting a mixture of grasses and legumes as cover crops. In addition, they have converted much of their highly erodible land into grasses and legumes to prevent soil erosion. 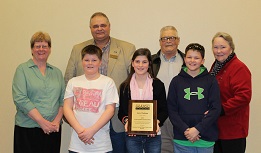 Photo: (L-R)  Melanie and Dennis Durham with their children (front) Steven, Lanie and Jackson, and Jerry Durham and his wife Ann. 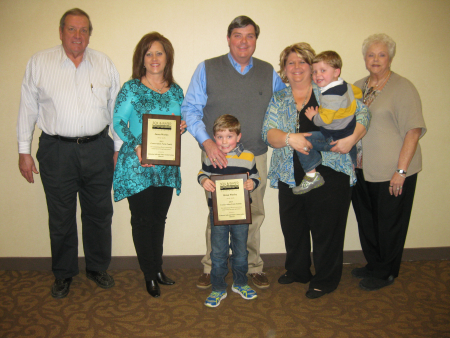 Brian and Jason Worley were recognized as Johnston County’s Conservation Farm Family by the Johnston Soil and Water Conservation District. The family farm, which is located in Princeton, has been in the Worley Family for over a hundred years. Brian and Jason’s father passed away at a young age and their uncle, Billy Worley, assisted with and continued the farming operation. The Worley family grows wheat, corn, rapeseed and strawberries. They use a practice called ‘no-till’ in planting their crops. No-till is when minimal soil disturbance occurs during the planting process. This can be done using a no-till drill or no-till chisel or blade.   The Worley’s utilize rapeseed as a winter cover crop and they no-till the seeds into the corn residue. This maximizes the soil’s water and nutrient holding capacity and prevents soil erosion. This also enhances their soil’s health. With Jason’s background in agriculture business management, Brian’s background in mechanical engineering, and Billy’s extensive farming experience, they all work together as both a team and a family in producing agricultural products for the community.