Ghost Walk Will Be In-Person This Year

The Johnston County Heritage Center will stage its 17th annual Ghost Walk on Thursday, October 28, in Smithfield’s historic Riverside Cemetery. Beginning at 6 pm, five characters from Johnston County’s past will be brought back to life. Visitors will be greeted at the corner of Second and Church Streets beside St. Paul’s Episcopal Church, where they will be given guided tours through the cemetery.

The line-up includes two individuals whose remains are interred in Riverside Cemetery. Bettie Morgan Brown, a pioneer African American teacher (portrayed by Crystal Kimpson Roberts), was buried there beside her father in this predominantly Caucasian cemetery before segregationist Jim Crow laws were passed in the late 19th century. Dora Hood Kirkman (portrayed by her great-granddaughter Eleanor Wallace Starling) grew up in Bentonville and as a child witnessed the last major battle of the Civil War.  Shaun Braswell will portray the legendary 19th century prankster Eli "Eel" Olive. Amos Tucker will portray Colin Hamilton, Sr., a Clayton blacksmith whose son Colin became a General in the U.S. Army. Dr. Charles Furlong, Johnston County’s only African American physician for much of the 20th century, will be portrayed by Haywood Watson.

"This is a fun educational event for all ages that a lot of people look forward to," says event chairman Matt Dean. "It’s a great way for families to learn about interesting personalities from our history."

Admission charge is $5 for adults and $3 for students, payable at the event. No advance tickets will be sold.

For further information, call the Heritage Center at 919-934-2836, or visit the Center's website at www.jcheritagecenter.org, or Facebook page, www.facebook.com/jocoheritage. 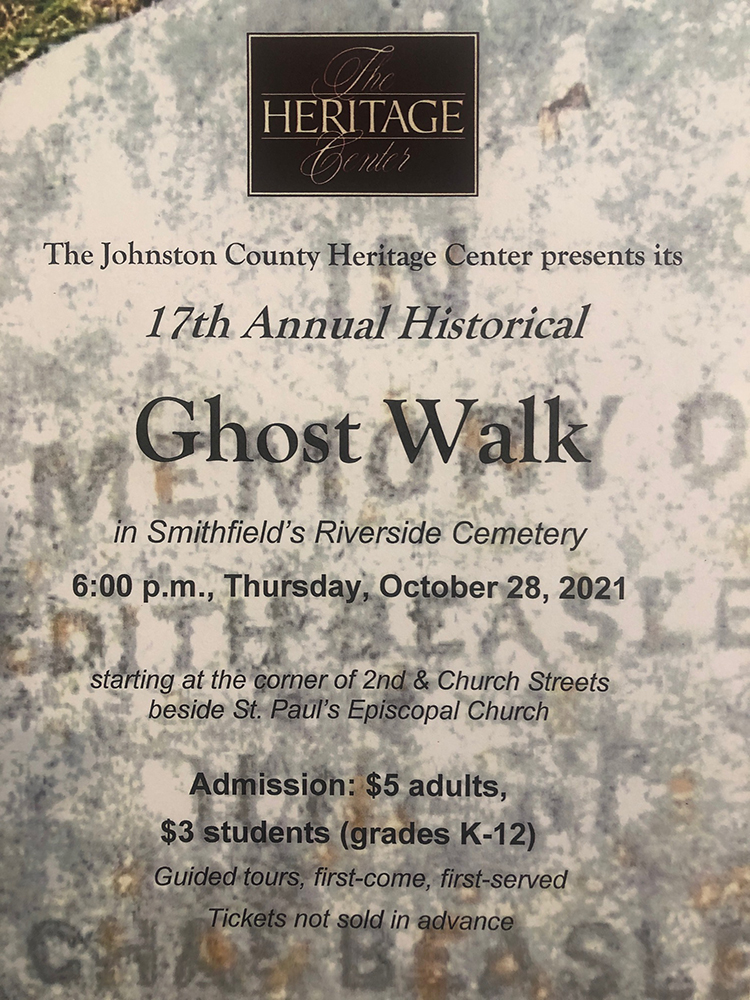