Clayton, NC – A new historical marker will be unveiled on April 30 at C3 Church near Clayton to commemorate the Triangle area’s earliest known church. Local Baptists built Three Creeks Meeting House prior to 1757 in the aftermath of the First Great Awakening. Worshippers came from farms scattered along Black, Middle, and Swift Creeks and the congregation flourished through the second half of the 18th century. By the early 19th century they appear to have disbanded. The name Three Creeks soon faded from the area's collective memory and its location was lost. That is, until recently discovered documents pointed local historians from the Johnston County Heritage Center to a forgotten forest knoll next to a new subdivision in the County's Cleveland Township.

"For a long time local historians believed the old Three Creeks Church was somewhere in the Panther Branch area of Wake County" says Heritage Center Director Todd Johnson. "However, land records and meeting minutes of the Kehukee Baptist Association in the 1770s place it near the mouth of Wood's Branch where it flows into Swift Creek in western Johnston County. After finding some overlooked sources," Johnson adds, "there was this eureka moment."

Johnson shared his findings with local resident David Yeargan, who had spent time exploring Swift Creek. "David found this prominent hilltop on Wood's Branch with what appears to be old foundation stones scattered around. He was convinced it had to be the long-forgotten meeting house site," Johnson said. "When he took me there, I was also convinced."

The site was part of a 640-acre land grant William Wood received from Lord Granville in 1753. Wood had a grist mill with a large millpond, and he also operated a tavern or public house at his home. Britt's Bridge was built nearby to allow travelers to cross Swift Creek. Elder Thomas Tully, one of hundreds of new settlers, was credited as the first pastor of this pioneer congregation. His kinsman Hardy Sanders was a leading church member and also sheriff of Wake County and commander of the Wake militia during the Revolutionary War.

The public is invited to C3 Church, located at 8246 Cleveland Road, Clayton, as the Johnston County Heritage Center and the Smith-Bryan Chapter of the Daughters of the American Revolution unveil a marker on the church grounds on Saturday, April 30, at 11:00 a.m. A reception will follow the ceremony and tours will be offered to those wishing to visit the meeting house site.

For more information, call the Johnston County Heritage Center at 919-934-2836 or visit the Center's website. You can also stay updated on some of the great exhibits and events happening at the Heritage Center by following their Facebook page. 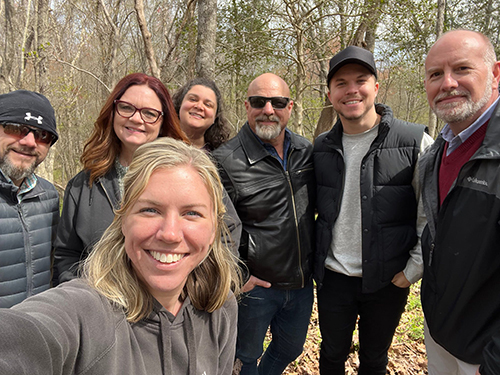