This article was published in the Smithfield Herald on Tuesday, April 24, 2007 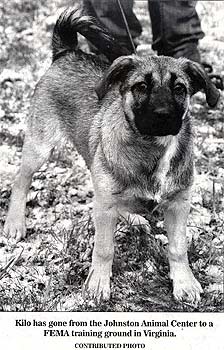 Smithfield -- A dog that once spent his days in an animal shelter is learning how to become a hero.

Elaine Smith of the American Kennel Club came to the Johnston County Animal Shelter recently to discuss microchips with adoption coordinator Lisa Carlson.  After learning that Smith was a volunteer canine handler with the Federal Emergency Management Agency, Carlson asked her how to tell if a shelter dog could be trained to work for FEMA.

"We tested three large dogs, but they were too friendly," Carlson said. "We came around the corner and saw this puppy." Elaine said, "Can we get him out?" And I said, "Sure," so we brought him outside. She would throw a toy, and he would bring it right back. She was blown away by him."

The dog, later named Kilo, came to the animal shelter after his owner was arrested during a drug bust in Johnston. The Johnston County Animal Protection League had planned to take Kilo into its foster care. Instead, Smithtook him to Virginia last month to meet his handler.

"The tug toy is the preferred reward for FEMA canine handlers, so this little puppy was incredibly focused on the toy," Smith said of Kilo's testing at the shelter. "Once he got it, he carried it around and wanted to play with it constantly. Most dogs, you give them a toy and they might carry it for a second or two and then drop it, but not him. He literally carried it around for 20 minutes."

"A dog's nose is hundreds of times more sensitive than ours, so it can detect the scent of a person literally, depending on the weather conditions and things like that, a mile away," said Smith. "Most of the time, we are asking the dog to go into a structure or building that is not safe for a human. Maybe I can't go in because the floor will collapse, but the dog can go in and search that collapsed structure within a few minutes, where it would literally take us hours to go in and pull out rubble piece by piece to look for people."

It takes a special dog to work for FEMA, Smith said. "You want to look for a dog that is not afraid," she said. "You have noises, smells, diesel fumes, fires and all sorts of things. You want them to completely ignore that and search for the person."

To reach certification, Kilo must be able to work off-leash, negotiate ladders, teeter-totters and elevated planks and crawl through small, dark tunnels. He also must complete an obstacle course in three minutes, indicate a live victim by barking for a minimum of 30 seconds, search rubble piles and find victims while his handler is not present.

Overall, Kilo's training in Virginia is going well, Smith said. "What I do is find a diamond in the rough," she said. "[Kilo] has gone to a great home and hopefully, he will have a great career."