Monday night's event at Bob Jaycee Kiddie Park brought new signage for the East Coast Greenway, along with promotional material about the Town of Smithfield and Johnston County's contribution to the greenway's success and usage. This week, Johnston County will have the pleasure of hosting an influx of cyclists from the 7-day Cycle NC event, averaging about 2,000 cyclists this year. Smithfield Recreation and Aquatic Center will be a host site for overnight stay and cyclists will flood the town after traveling 70 miles from Creedmoor/Butner.

The Monday night meeting included prominent representatives from the county such as Commissioner Butch Lawter, Parks, Greenways, and Open Space Coordinator Adrian O'Neal, President of the Friends of Johnston County Parks Dave Herpy, and East Coast Greenway Alliance member Steven Hardy-Baez. The hope is to help the town prepare for the positive economic benefits from the cyclists, along with promoting one of the county's most important features, that being the East Coast Greenway that spans from Maine to Florida. 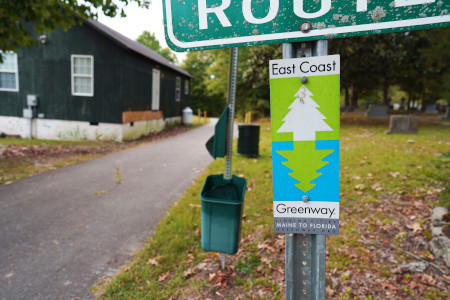